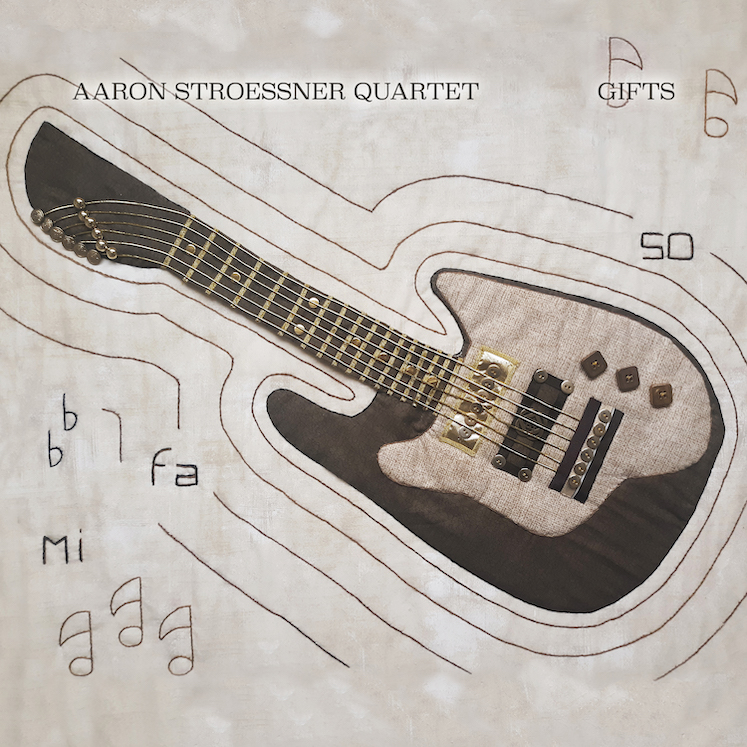 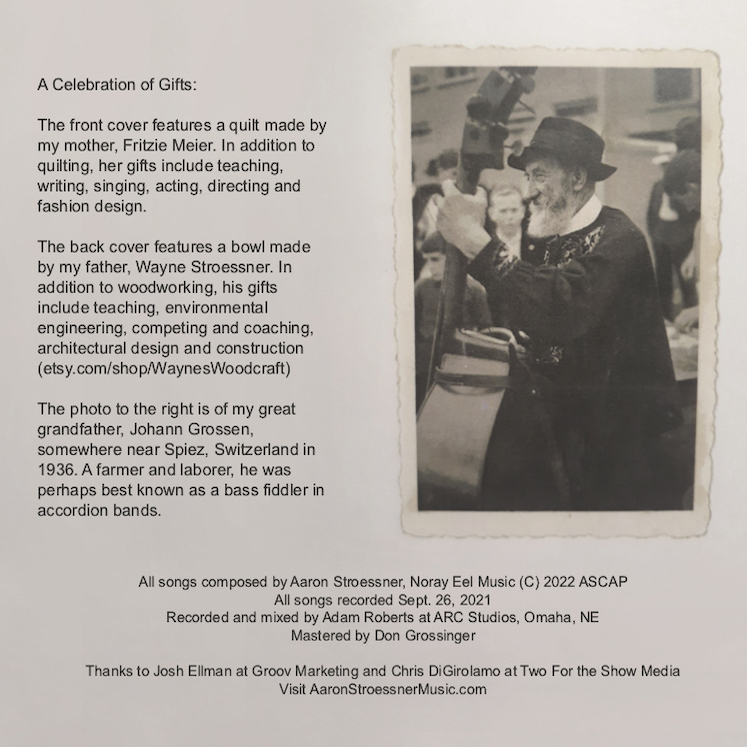 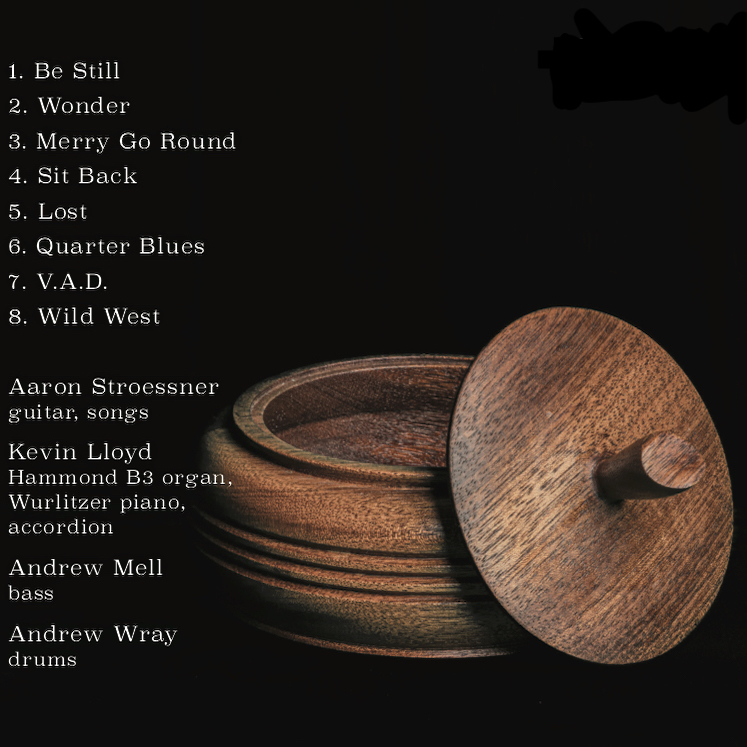 Almost everyone has some sort of natural gift, but what we do with these gifts is what makes the difference. Guitarist and composer Aaron Stroessner is well aware of this concept, and it is the central focus of his album Gifts. This is an excellent jazz album and a fitting tribute to his parents, in recognition of the gifts they passed down to him over the years.

Stroessner’s jazz journey has a few more twists and turns than usual. He earned a Bachelor of Music at Berklee College but, instead of getting into jazz, like many of his classmates, he decided to join a rock band. For nearly a decade, he fronted Dead Left, which he describes as a “country/punk/grunge/pop” group.

After Dead Left released four CDs, Stroessner decided to continue his education and return to his jazz roots. He earned a degree in jazz from New York University. He later moved to Nebraska to earn his DMA degree in Jazz Guitar from the University of Nebraska. He now serves as a professor of music at Nebraska Wesleyan, Wayne State College, Southeast Community College, and Iowa Western Community College.

Considering his rock resume, there would be little surprise if Gifts was a jazz fusion album. While he is no stranger to fusion, much of the music on Gifts concentrates on more traditional ballad sounds and straight-ahead jazz. There are also a few more modern-sounding songs included, which help give the album a nice stylistic variety.

Although these are all original compositions, many show the influence of classic jazz artists. It is obvious that Stroessner has devoted a good deal of time over the years listening to and learning from the masters. This also adds to the underlying gift concept.

Gifts features Stroessner on guitar with Kevin Lloyd on keyboards and accordion, Andrew Mell on bass, and Andrew Wray on drums. The band obviously has strong chemistry, and the level of musicianship is impressive.

The album’s instrumentation also brings out a unique quality in each song. For example, the opening track, “Be Still,” features Stroessner’s melodic guitar balanced with Lloyd’s cool organ sound, creating a somewhat reflective and nostalgic feel. In contrast, songs such as “Sit Back” and “Quarter Blues” offer soulful grooves which not only show how tight the players are as a group but also how talented they are at improvisation.

Other compositions have a more modern sound. “V.A.D.,” with its Latin-tinged beat, lets Stroessner stretch out with some tasty licks which are clearly done in his own unique style. The song “Merry-Go-Round” features Lloyd’s Fender Rhodes playing alongside Stroessner’s guitar, creating an uplifting seventies-era feel.

Stroessner’s Gifts delivers on all levels. Rather than trying to sound like jazz guitar legends, he builds from their influence to develop his own style. This is an album which bears repeated listening. It is clearly a very personal album for Stroessner, but his musical gifts will resonate with anyone listening.

—Kyle Simpler – All About Jazz

AARON STROESSNER QUARTET/Gifts: An electric guitar quartet that has a different feel that almost makes you think of Hawaii—-but away from the tourists. Atmospheric but not in an ECM way, the vacation vibe makes this stand out and really grab your attention. With solid work from all involved, it’s easy to welcome this guitarist to the fold.
—Midwestrecord.com
I’ve listened to your album twice now and I’ve got to say it’s really impressive.  I enjoyed it more the second time around (which is always a good sign). Great mix – everything is balanced nicely and tones are very authentic. The songs are solid … I like where you take the listener and it’s a nice sonic journey. I love your keyboard player [Kevin Lloyd] too. He’s a good listener to what you are doing and responds perfectly. Tasteful and mature. But the real star of the show is, of course, you. Well done, my friend. Classy jazz songwriting and naturally-flowing arrangements. Your phrasing is what sets you apart, with smooth and almost vocal singing phrases. Your solos zig when I think you’re gonna zag, and that unpredictability keeps it interesting to listen to. My favorite songs are the more uptempo tunes where you use a little overdrive Dumble tone. Nice. Even the slow ones, you show off your knack for tasty color with the chords you’ve chosen… Again, fantastic job all around.
—Scott Novak, guitar player and audio connoisseur

Some thoughts on “Gifts”. Keep in mind that I am no music critic, and I really have no idea what I’m talking about. But anyway, some reactions:

I love the hammond organ, first of all, and I like how it pairs with your electric guitar… I also like the kind of 50s-60s hipster jazz vibe you kick up. I get that jazz is all about the improv, but I like a bit more structure around it, and the pieces you do more of that appeal to me the most. Even in the least structured pieces, I really liked the melodies. You’ve always had a nice ear for catchy phrasing — harkens back to your Dead Left work.

Be Still – I love the slow jam – really lets me hear the jazz improv come through and for a slow processor like me, it’s easier to enjoy.  (I have to listen to jazz with my eyes closed, especially at clubs, to hear what’s going on.)

Wonder – I loved the build and the uplift from this. Some Jeff Beck influence. In the later part of track, there is great interplay between the guitar and organ. I wanted this one to go on and traverse into some different area, but the ride as is was just fine.

Merry go Round – really liked this one. Little more up tempo and a lot of blending of more structured melodies with improv. Some fine wine in here.

Sit back – Shifting gears here, l like the energy.

Lost – Every new one seems to be a new fave. I like the melancholy feel at the beginning, and that old world accordion is the perfect accent.

VAD – Maybe my favorite track. Just so much energy and great playing on this one.

Wild West – Also one of my faves. I love the scene you set with this; wild west indeed.

Stay Informed of ASQ Shows in Your Area!